This morning I finished packing my bag outside of the auberge. Without me noticing, a big dog sneaks up on me. But he didn't bother me. But he did growl at the next woman and sat down in the middle of the road so no one could pass him. We all tried to do it one by one and were successful.

It's a beautiful foggy morning again! I can't see anything in the distance. First big hill and the view from the top is breathtaking. There is a platform with a little bench at the top of the hill to enjoy the beauty. I sat down. 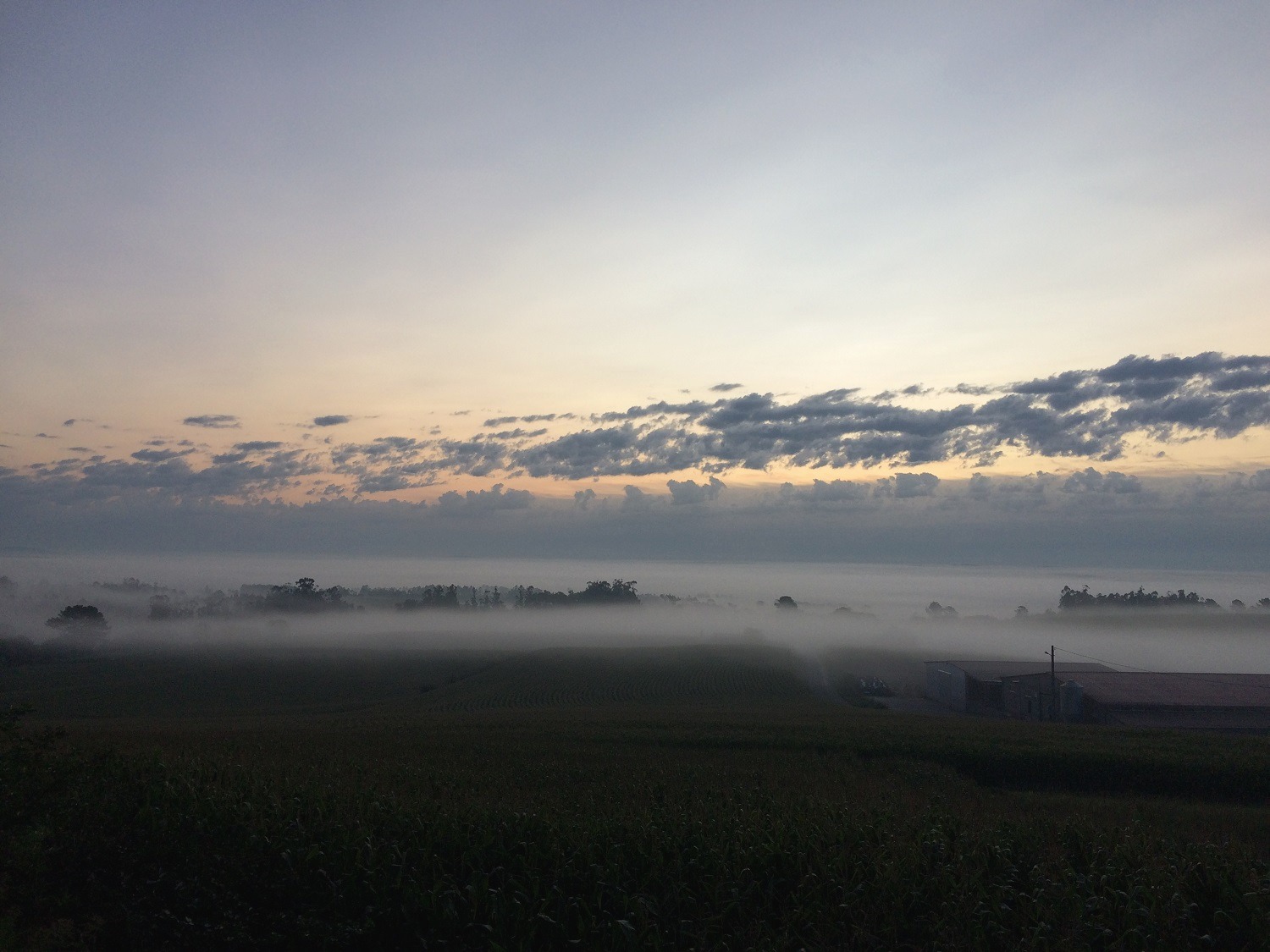 The fog looks like snowy mountaintops which have treetops trying to get through them. 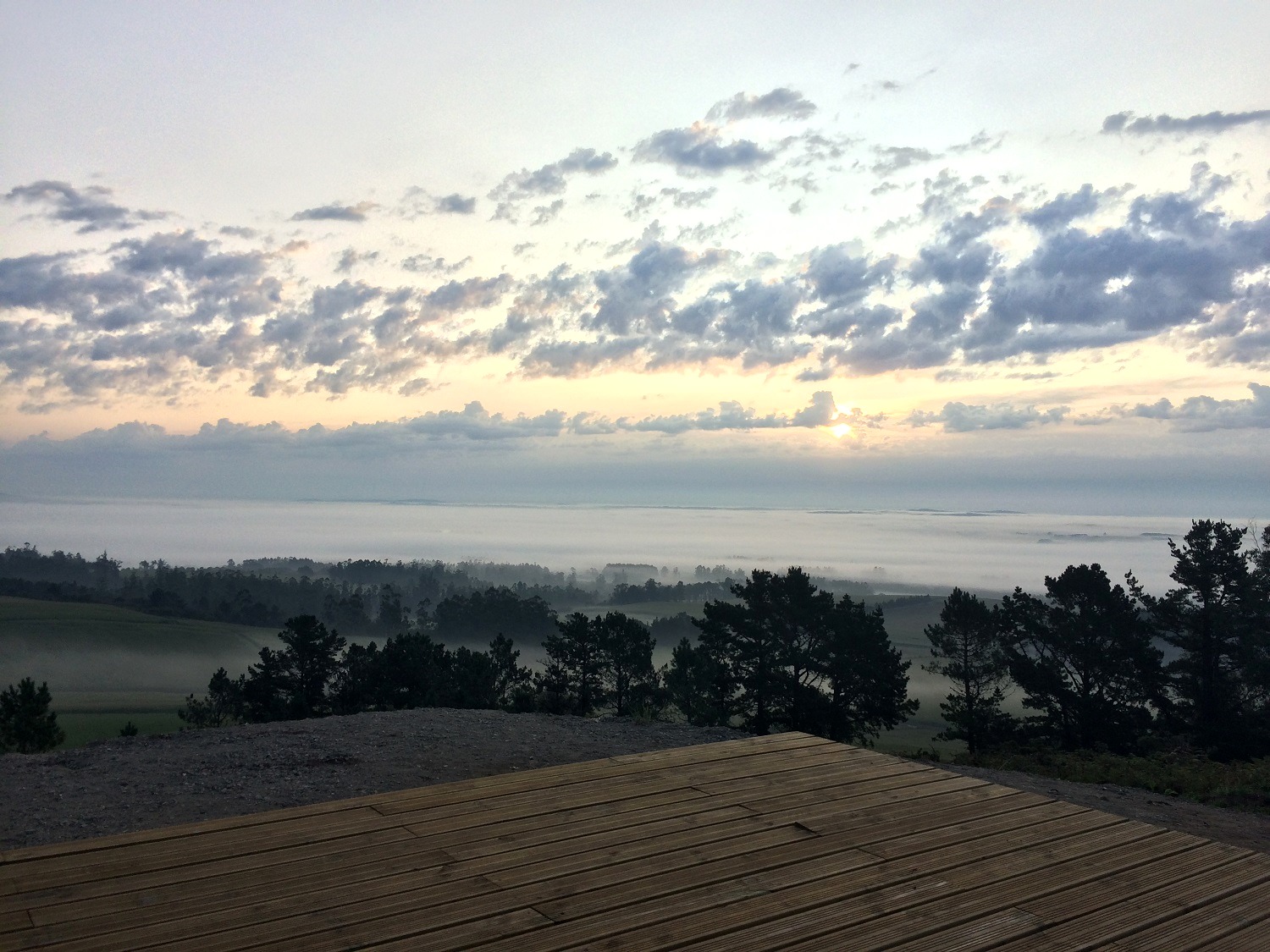 I was walking down the hill and I could still enjoy the same beautiful views.

I guess Spaniards love dogs because I see them every step of the way. I am passing through a little village and I see a big German shepherd dog run at me. I stop because I got a little uncomfortable. He got to my hand and I realized he wanted to play, but I still feel a little uncomfortable. And then he jumped on me. “Oh, no, no, no!” He tried to play with me but once he realized I wasn't the best playmate he laid down in the middle of the road and waited for the next pilgrims.

At the bar where I had breakfast a guy named Tom starts a conversation with me. Turns out we stayed at the same auberge but I guess I didn't notice him. And he has the same plans as I do - two long days until Muxia and one until Finisterre. We decided to hike together because the day is long and probably cheering on each other won't do bad for both of us.

The path is similar to the last couple days. At some points taking us by the highway, but mostly through forests. This was really nice for my feet - the road had a soft surface - carpet. I really enjoyed it. Sad that it was not for a long time. 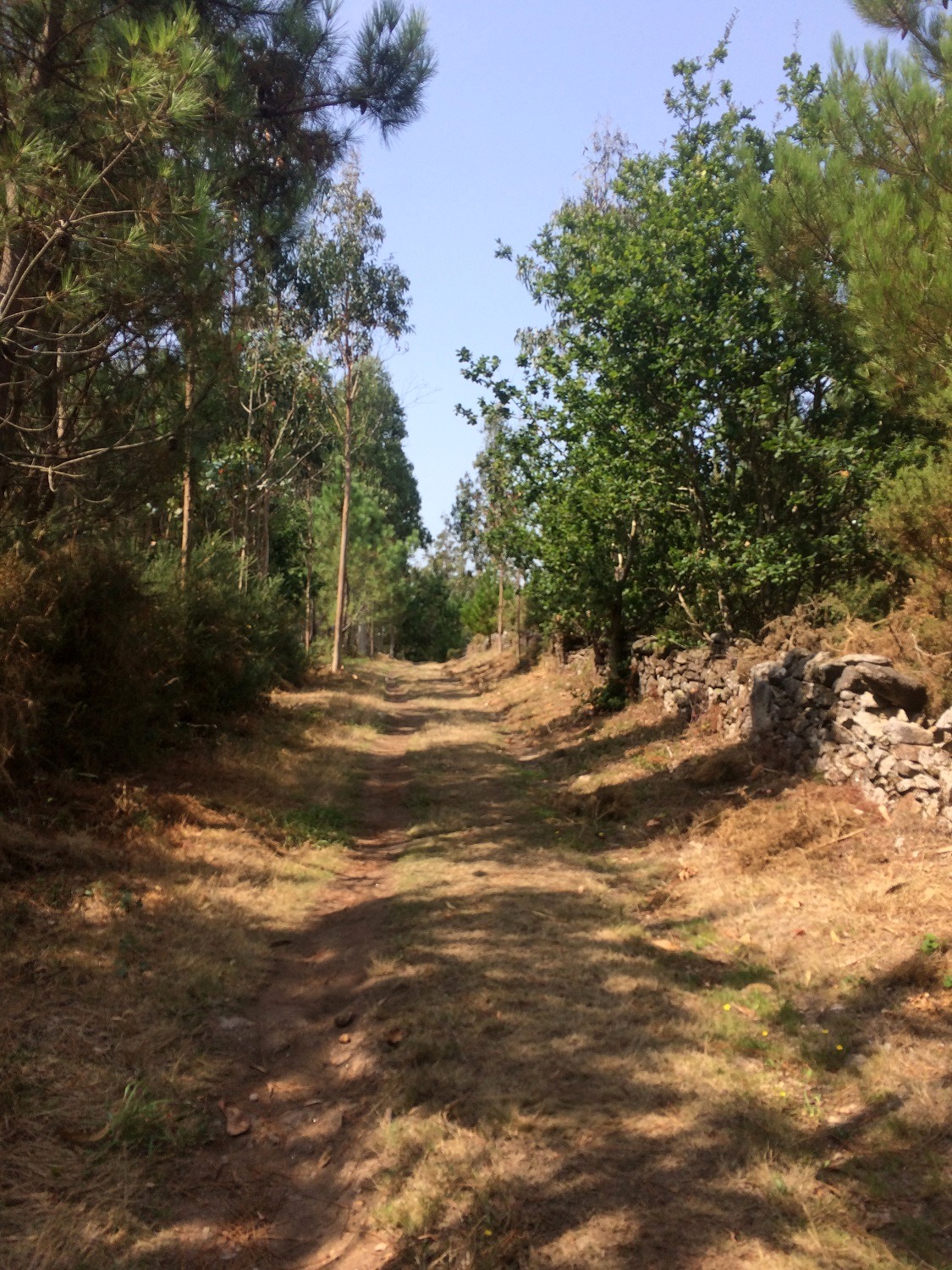 We reach the point where the road splits into two - one to Finisterre and one to Muxia. 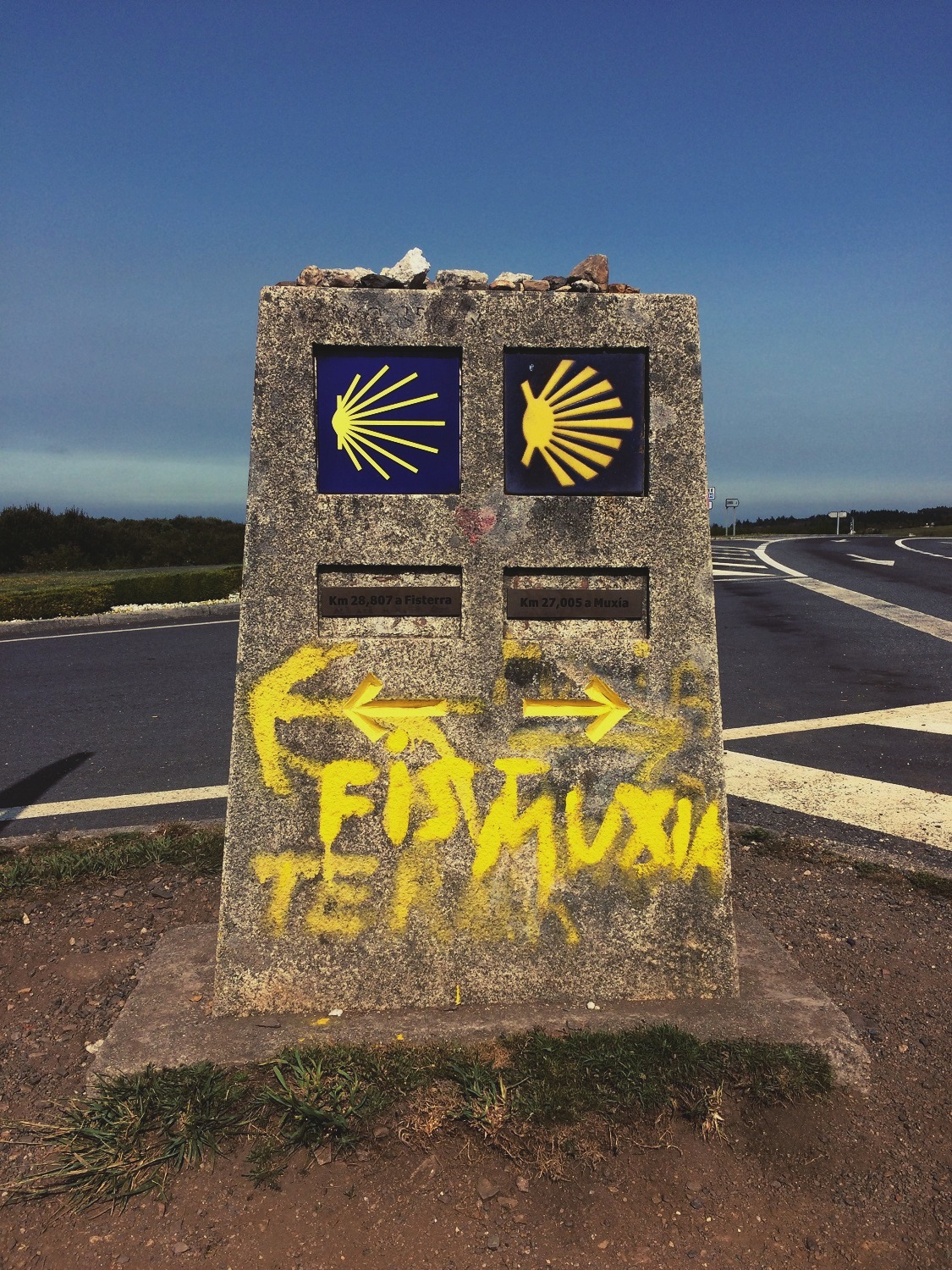 To make it more fun, we play a game - guess how many kilometers and meters left. I am losing. so far. It is not so hard to hike as yesterday, but I do feel the tiredness. And also the hills every once in a while go up and down. Tom laughs about me talking to all the animals I meet on the road. He's not as big of a fan of animals as I am. I talked to the sheeps too. 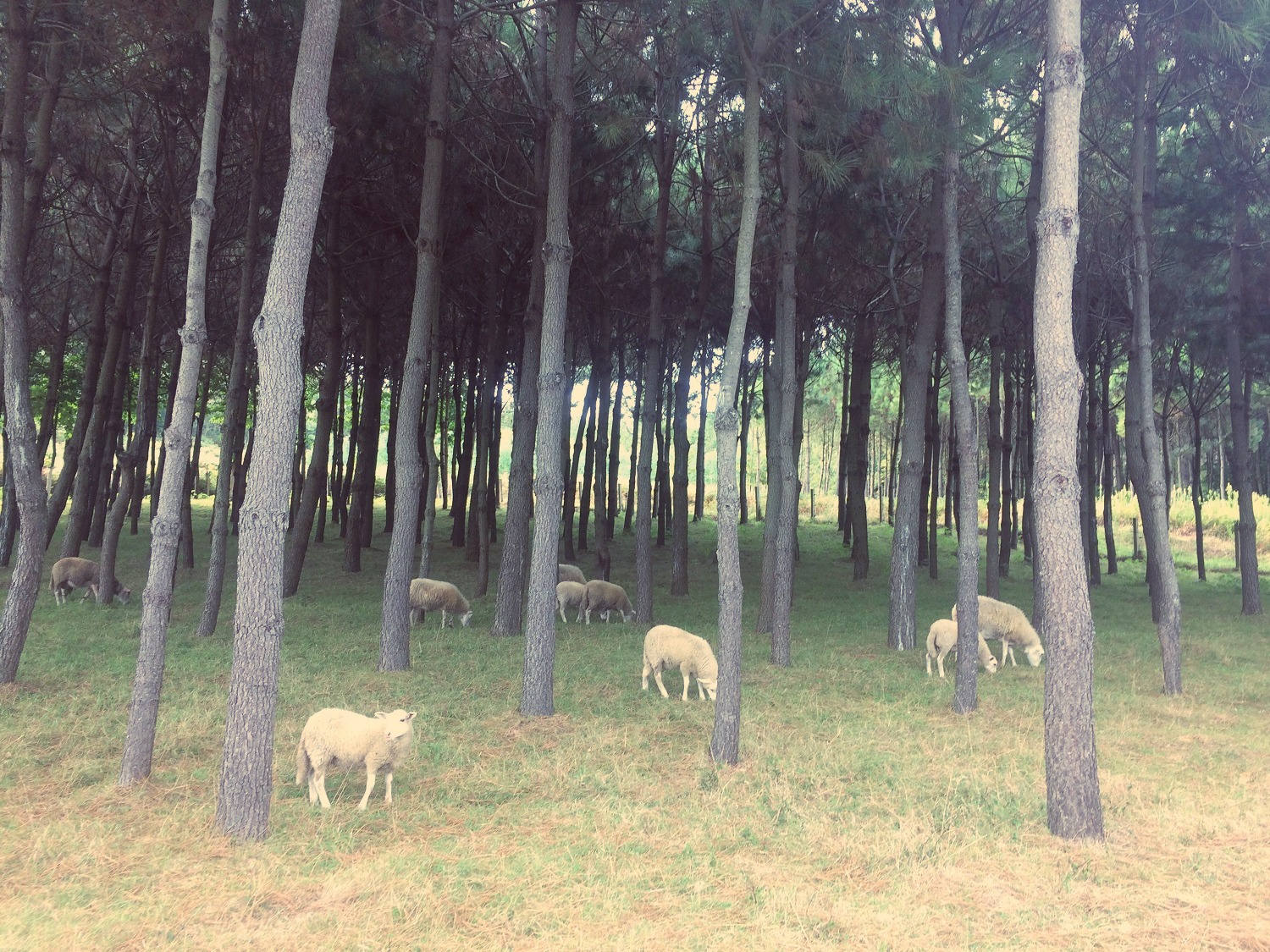 When we were having lunch Tom offered to call to a couple auberges to find me a bed. Since this is a time the locals are also on vacations and trying to enjoy their time in the different towns. He already has a spot for him booked because a friend he met on Camino is a little bit further than he is and had already booked 2 last spots in an auberge. I got a spot and told them to not give my spot away since I'll be there late - around 7 PM.

Walking through another village I saw a pit bull. A lot of people are usually scared of these dogs but I saw him wiggling his tail. I dared to pet him. And he brought me a little stick from his backyard. We played tug-of-war for a bit and i tossed the stick for him to chase and he's back in no time.

I think I should move here - so many doggos!

Kilometers are getting less and then I saw IT! 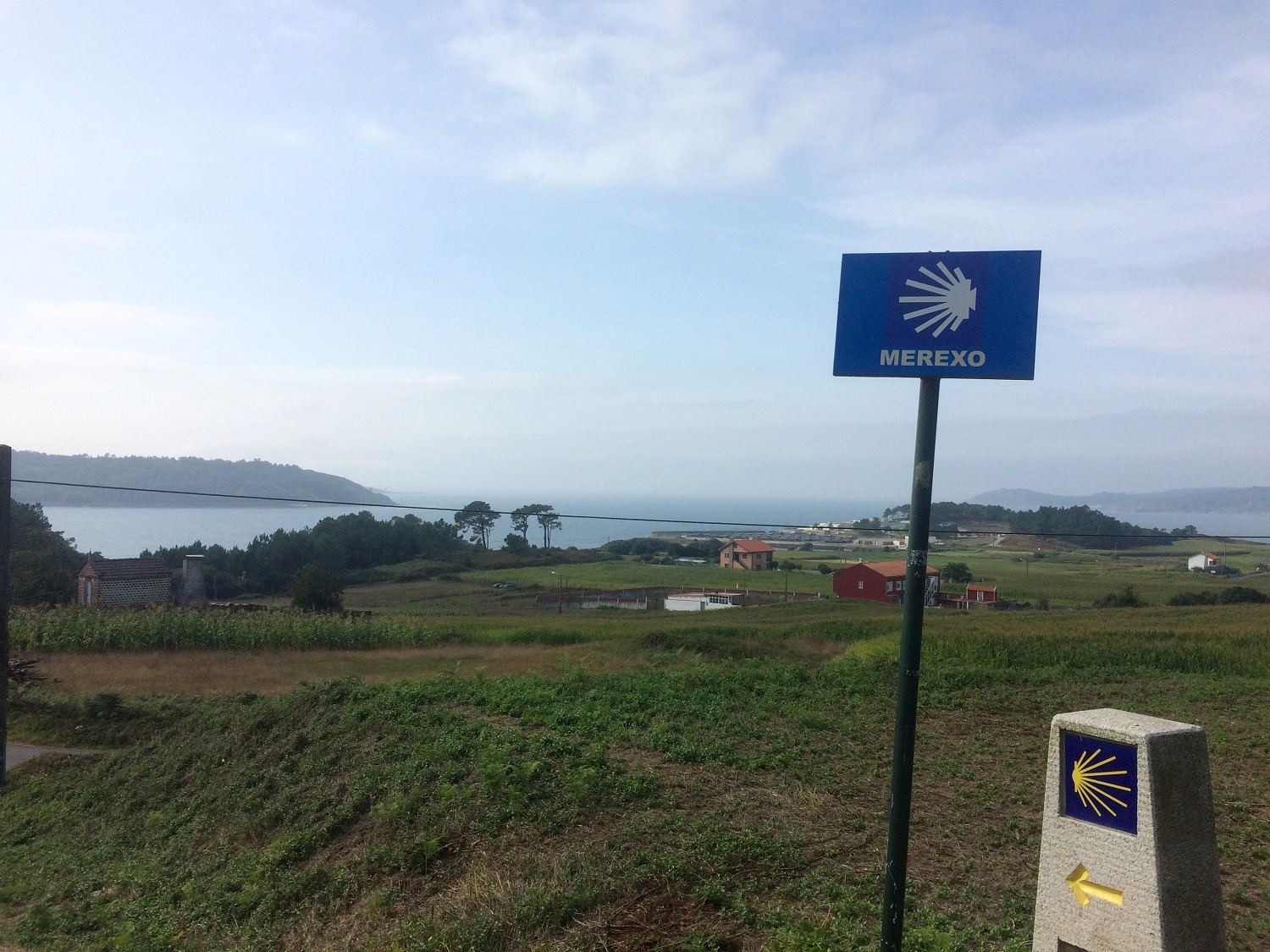 I was smiling so much! You can already feel the winds of the ocean. But there's still 7 kilometers until the city. The closer I get the more beautiful it gets. My heart is pounding. I love water so much. 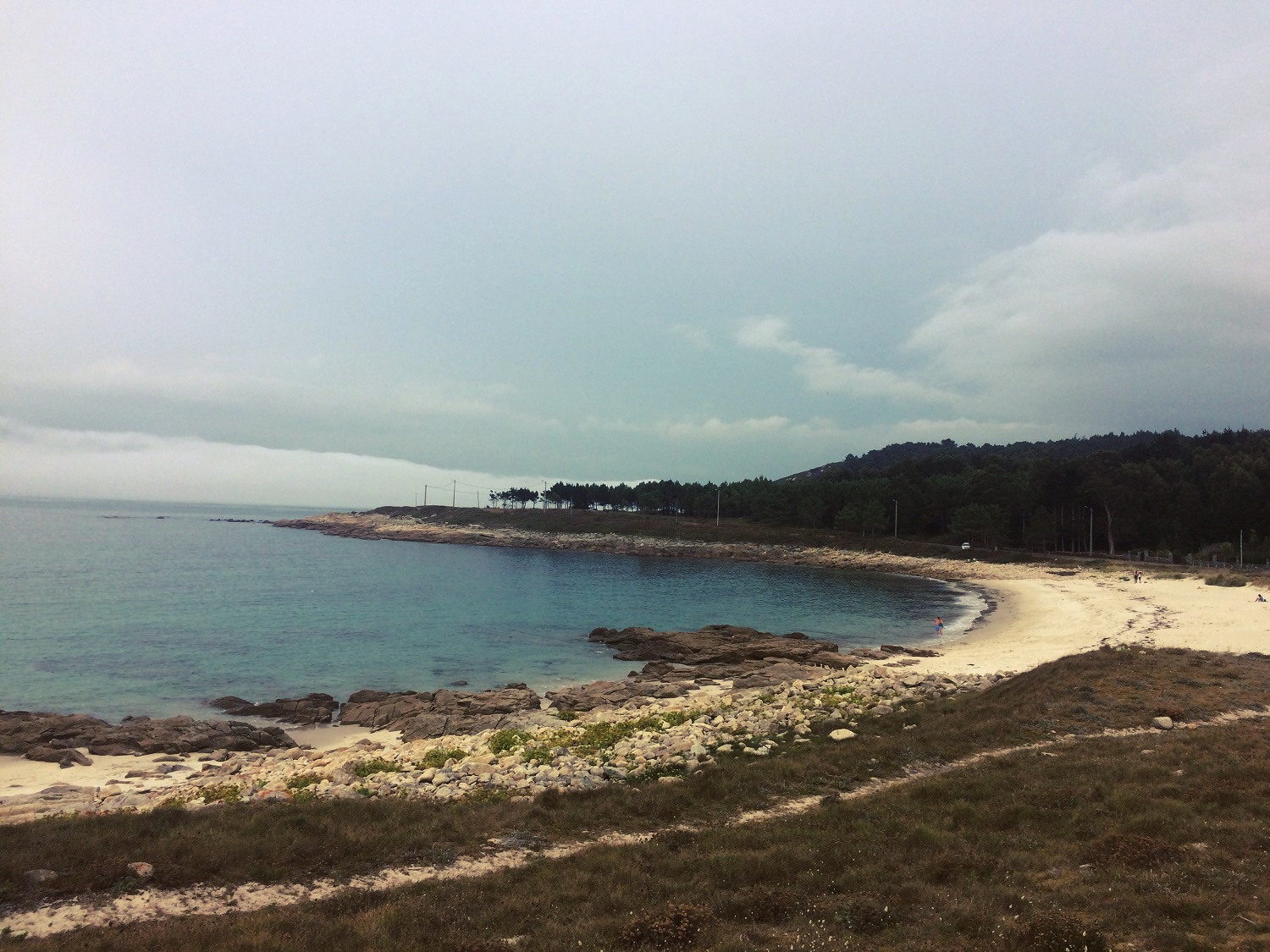 It's almost 7 PM, but people are still out and tanning.

When we entered the city Tom called to the auberge again to find out where exactly it is. All clear, we keep going.

We said our goodbyes at the auberge but also decided to go for dinner together.

When I entered the auberge and older man said: “Hi, Agnes!” Oh, I'm so happy about every time I am welcomed somewhere. And I hadn't even said my name when I entered. This man once again proved to me that the elderly men in Spain are super sweet.

I was so tired I didn't even take a look around. And a man next to me said - Hello, Agnes! Oh, that was Reino! The man who told me I should do the extended version of my trip through Muxia. And turns out this is also the best auberge in the city. Win-win!

The owner of the auberge lets me choose between 3 stamps - an octopus, a rooster or a cat. I chose the cat, of course. He asked me if i wanted the top or the bottom bunk. I chose the bottom one, of course. The owner said that the auberge is closed at 10 PM. I got a bit sad because after I shower it'll already be 8 PM. The older man put his hands on mine and said: “Don't worry, I'll give you the code to the doors.” So sweet! I said thank you to the old man and he said the same thing to me. What a super nice attitude.

The body and the legs are tired, but I am still going for a walk. A very nice promenade and a church at the end of it. I was enjoying the fresh air breeze from the ocean and getting the energy for tomorrow. 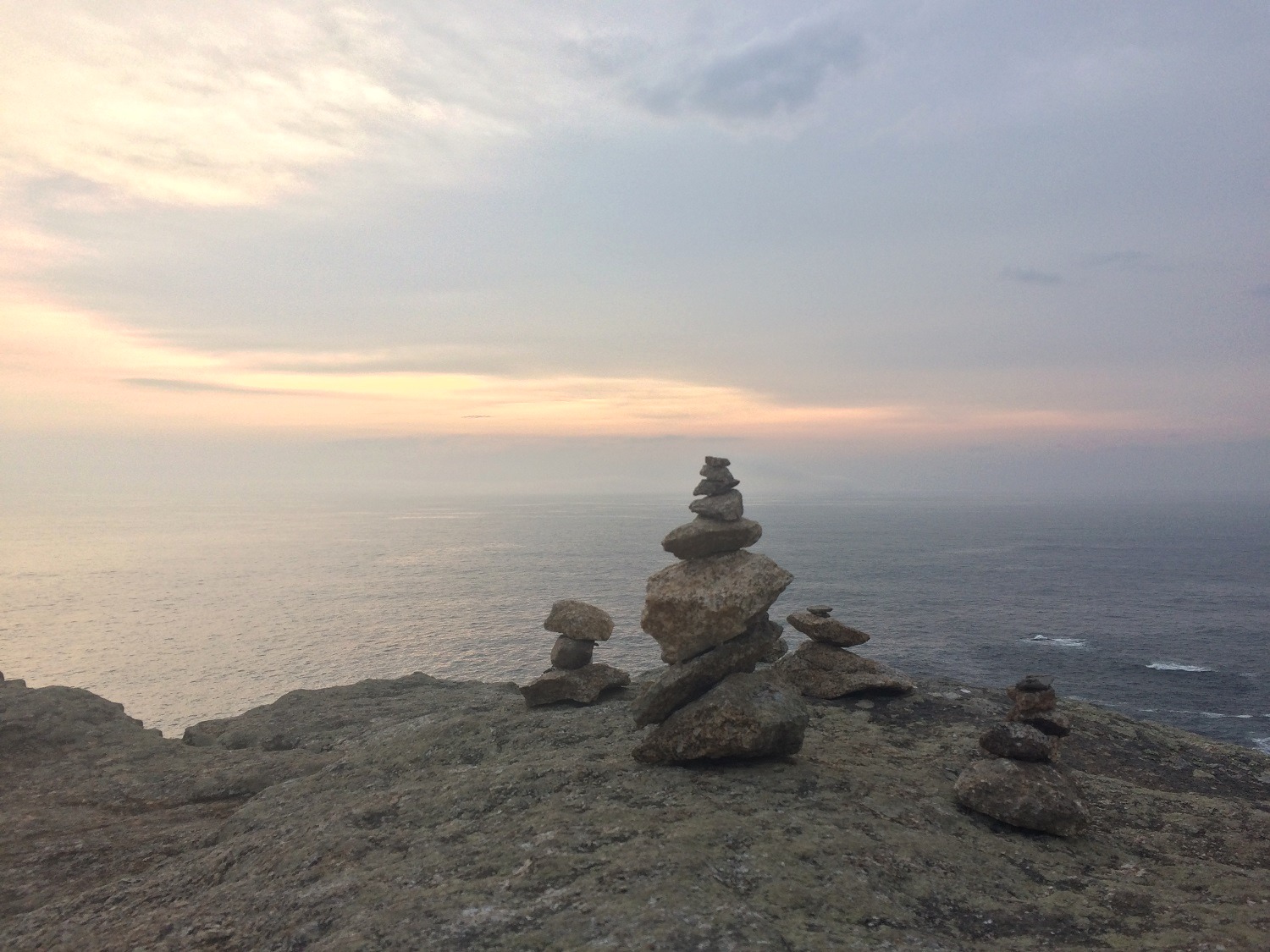 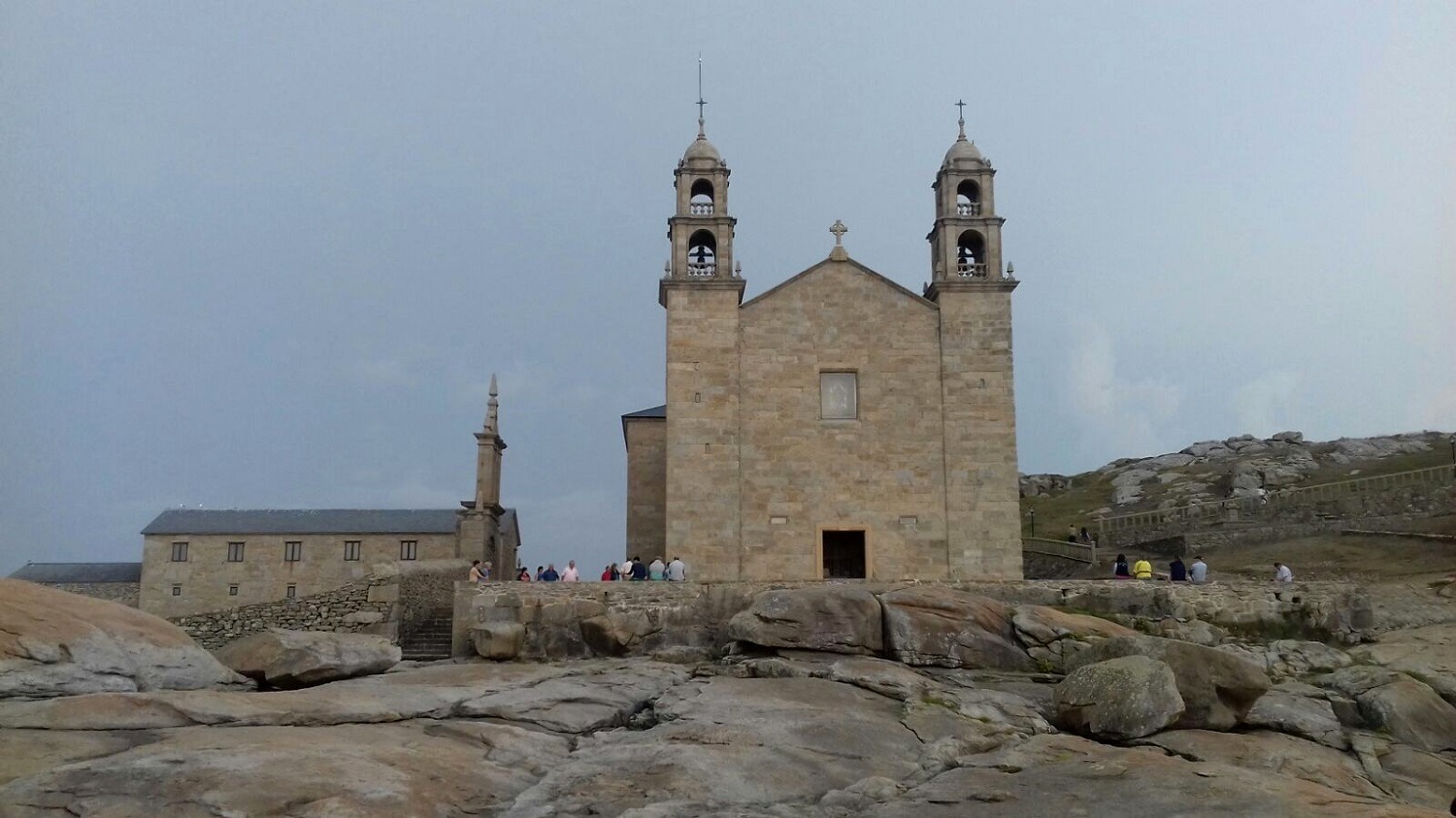 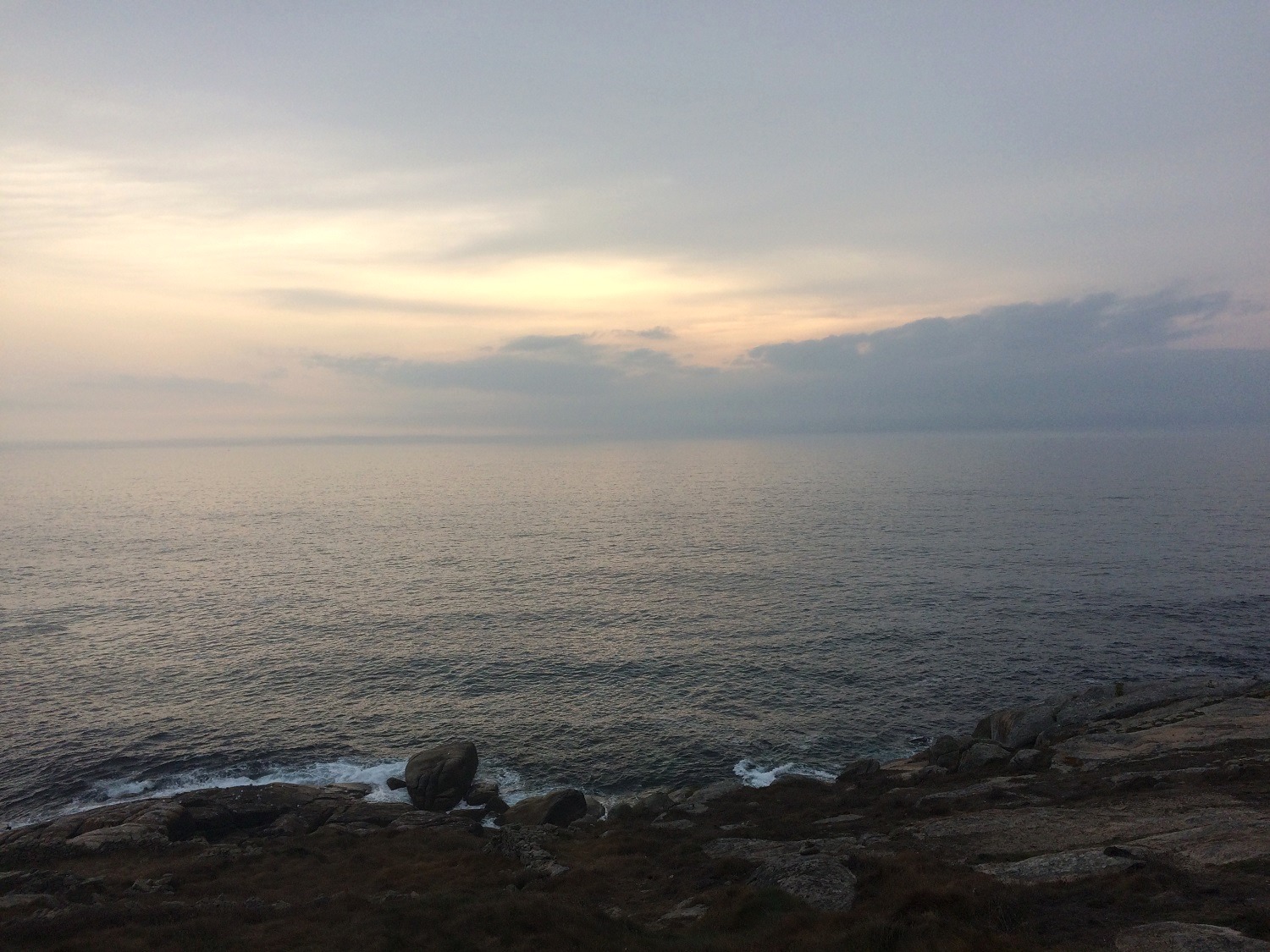 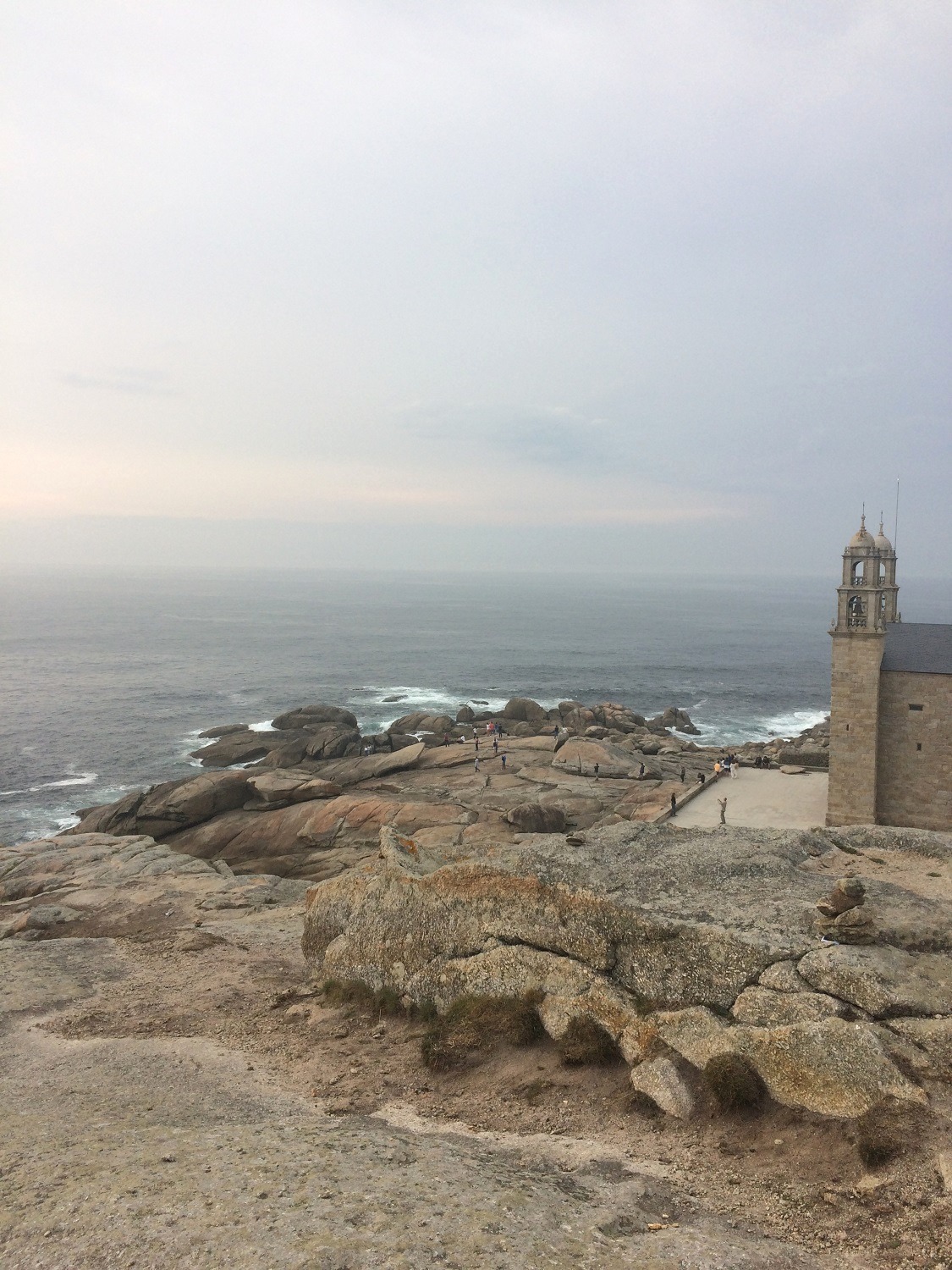 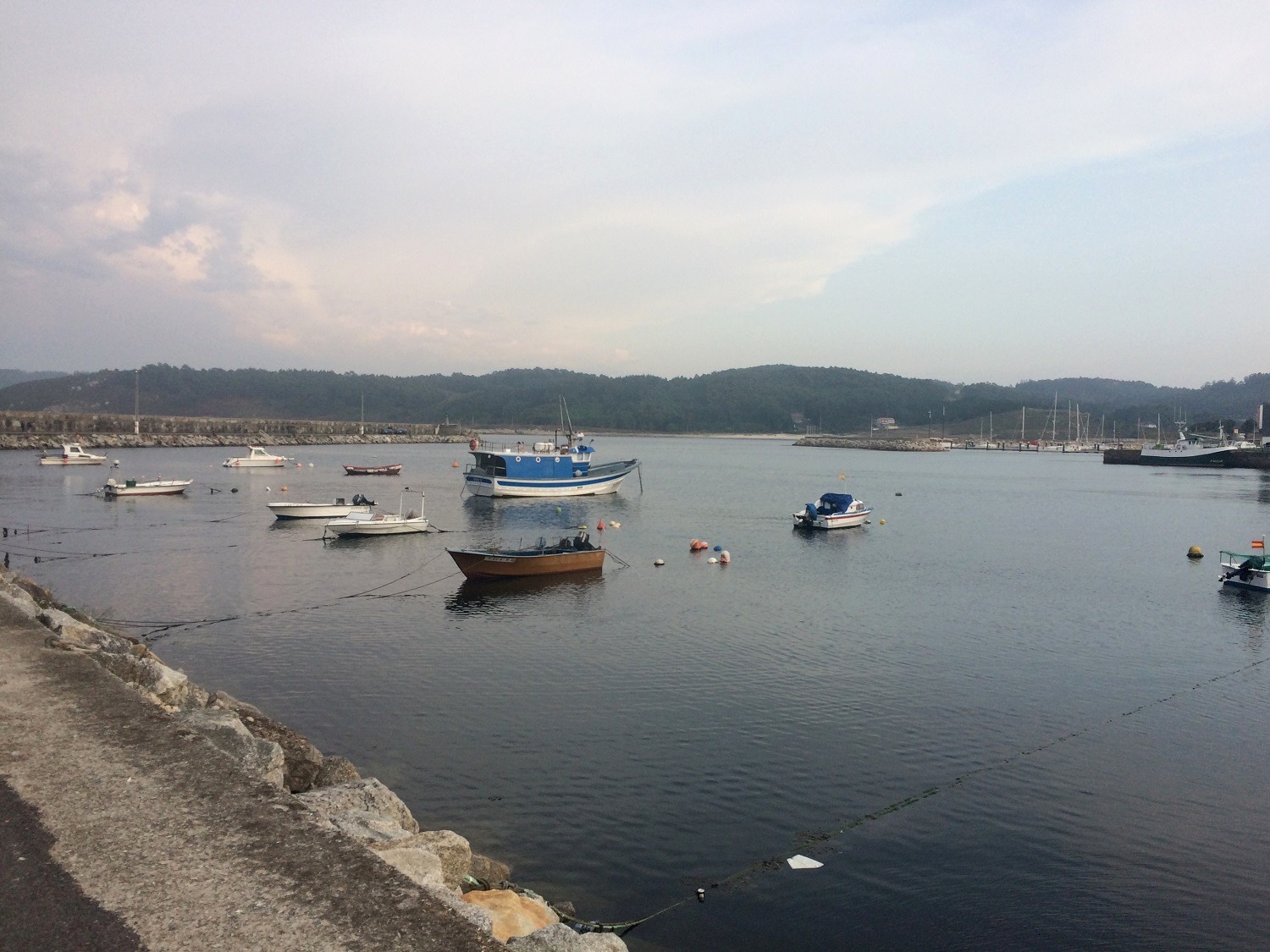 Tomorrow is the last day. Tomorrow I reach my finish line. Feels a little surreal. But I am ready for it.

When I was leaving the hotel the receptionist asked me if I needed a cab. Would...

I wanted to get up in time for sunrise this morning, but when the alarm went off...